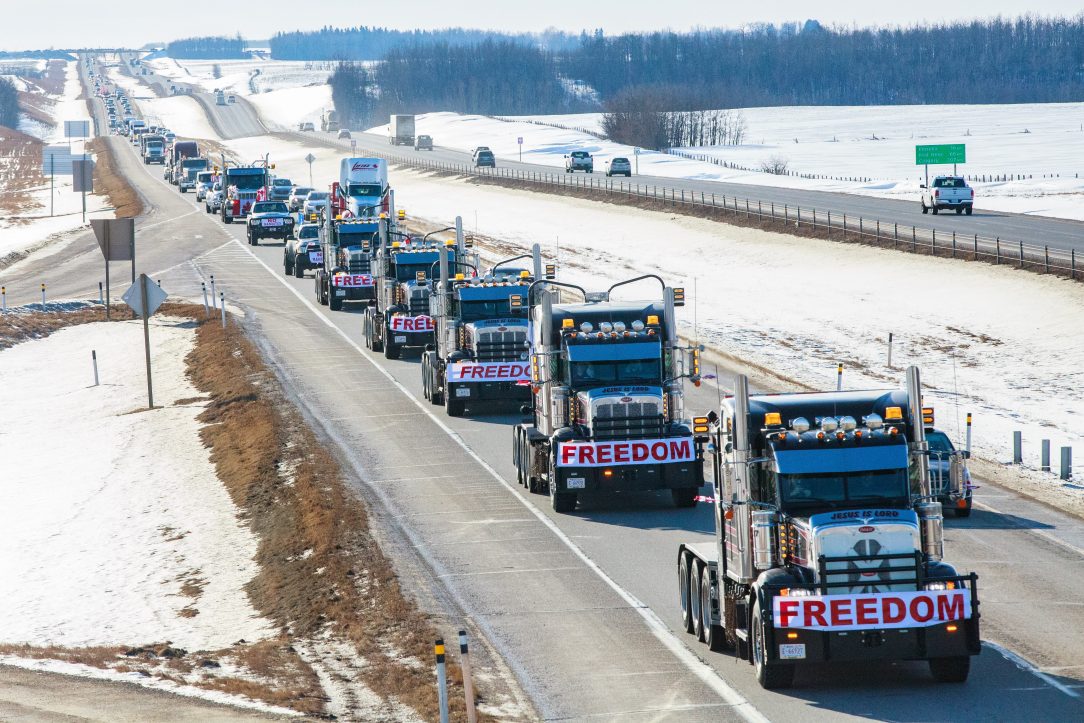 by Ken Low and Alison Hagan

At a recent Friday community call Ken shared his thoughts on the truckers’ Freedom Convoy. Alison Hagan captured his reflections to share with the wider Human Venture community in this article and on the portal (available to alumni).

The Freedom Convoy of the Canadian truckers’ story was compelling; it was about the ongoing struggle for freedom in Canada. They were drawing on a larger frame, trying to position the demonstration in the context of preserving freedom. From the perspective of the Human Venture, the demonstrators have a limited and faulty understanding of freedom. Unfortunately, the regulating bodies (government, police) also have a limited understanding of freedom, which gave the demonstrators an advantage.

It was really a battle of narratives. The truckers created this narrative of freedom, which justifies this feeling of outrage they feel towards government and society. The verification standards they are using, though, are not sufficient, and do not hold up when scrutinized.

We need to pay attention to the leaders of this protest and the stories that they are creating. Their beliefs and stories revolve around losing their freedoms. They are doing a rally call so that we follow a different path. However, only a select few know what that path is, which isn’t being shared.

If we were to examine these leaders, we would find many of them have a world view of the end of the world belief, which is behind much of the religious right in the US and now present here in Canada. There is a real danger of ideologically structured action of the demonstrators. The danger is not in the beliefs themselves, but in the way they attract additional beliefs that are real threats, not just to democracy but to civil society.

As a society, we haven’t equipped ourselves for investigation or inquiry; there is a lack of adaptive preparation for 21st century challenges. As things continue to unfold, as pressures and challenges of climate change and civil unrest heighten, we need to be prepared to handle protests, civil unrest, and an unsettled population.

People are feeling an acute sense of loss of meaning and connection. We have not prepared ourselves and our culture for the types of challenges that we are encountering, and there will be more to come in months and years ahead.

There is a cult-like behavior in the followers of the trucker convoy. If you are willing to risk forfeiture of a truck that is worth $200,000 and the welfare of your children, that is very clearly a level of commitment that we rarely see in normal people. If you are willing to risk accumulated wealth and resources you acquired as an individual, if you are prepared to sacrifice it all to keep the movement going, these are characteristics of a cult following.

People are willing to follow others when there is a level of hunger for meaning making. People want their lives to count, to be part of a larger story that involves a struggle with the forces of darkness.

Those forces of darkness are buried in the human psyche but are only slightly covered with dirt.  The darkness rises in periods of uncertainty. During the pandemic, people have experienced disappointment and a perceived injustice. It’s that mechanics of meaning making, how that unfolds in situations over time, and the current situation with the trucker convoy, that make it so difficult to understand and deal effectively with these challenges.

Trying to understand what our responsibilities are and how to carry them out is a challenge. Rather than lament the conflict, we ought to be welcoming the opportunity to learn how to be better citizens. What does it take to sustain a civil society? Especially in the face of stressors that society has been under?

Although it is easy to criticize the police for their relatively gentle approach to these demonstrators, this is something that we hope will be continued for future uprisings. The police were careful not to create a situation where their policing methods became a larger part of the problem. It is a hallmark of a progressive approach to proceed as gently as possible with as little harm as possible. That takes time and patience and a level of love for humanity. There is a distinction to be made between gentleness and passivity. The thoughtful, careful, gentle approach is entirely compatible with doing difficult things in a disciplined and determined way.

If people and leaders had a better understanding of adaptive positioning, then we would be further ahead when estimating the impact of decisions. The fragmented response of government and police is part of the framing challenges that exist when multiple levels of frames are at play. When just dealing with a local and tactical issue, it is much easier to find the capabilities and techniques to deal with the challenge.

The government and police did not know what kind of threat the convoy created for our society. There was a failure of leadership at every level. After this is done, the official inquiry will draw out the levels of responsibility and where leadership was inadequate to the task. We do not equip our leaders and individuals with understanding of how framing our lives and responsibilities works. Our challenge is to reason through the conflicts, looking at the multiple frames and conflicted assessments, of what we could or should be doing.

Photo by Naomi Mckinney on Unsplash

Alison Hagan has been a charitable fundraiser for over 20 years. She believes in the power of stories to compel individuals and societies to take action and stop injustices.