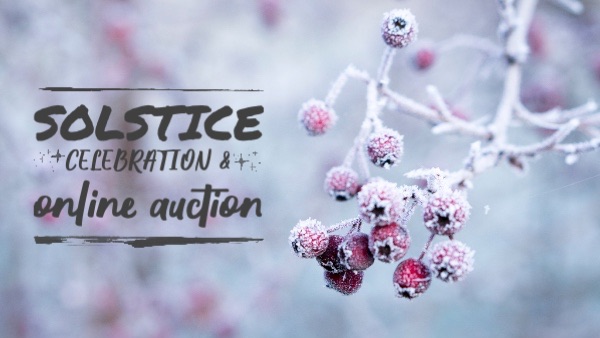 We have another great selection of auction items this year!

Check the auction out here.

Money raised will support participant bursaries for upcoming programs, offset 2022 expenses, and pay for Ken's books to further our resources and program development.

The auction runs until 9PM on December 23rd. If an item receives a bid during the last minute of the auction, the bidding time will be extended by 3 minutes, to a maximum of 30 minutes.

All winners must pay for their items, and arrange for pick up or delivery of their items within 3 days of the auction ending.

We need your help. Here’s why.

Our civilization is unsustainable. We’re on a breakdown path and more people are recognizing the need for a deeper understanding of what it means to be alive and human and the responsibilities that come with that. Here are two brief examples from different starting points:

“In order for us to adapt to this strange new world, we’re going to need more than scientific reports and military policy. We’re going to need new ideas. We’re going to need new myths and new stories, a new conceptual understanding of reality, and a new relationship to the deep polyglot traditions of human culture that carbon-based capitalism has vitiated through commodification and assimilation. Over and against capitalism, we will need a new way of thinking about our collective existence. We need a new vision of who “we” are. We need a new humanism – a newly philosophical humanism, undergirded by renewed attention to the humanities." [along with ecology and life sciences - Ken Low] Learning to Die in the Anthropocene: Reflection on the End of a Civilization by Roy Scranton; City Lights 2015 – p. 19

“Somehow, lawyers have come to dominate Washington debates about law, and that’s a shame. Legal categories should reflect a society’s deepest moral beliefs. But ask a lawyer if something’s a good idea, and odds are he’ll tell you instead if he thinks it’s legally permissible. If we live today in a world in which everything has become war and the military has become everything, it is partly because far too many top decision makers have spent the last fifteen years playing the game of law instead of the game of life.

“For lawyers, the game of law is safe and rule-bound: he who hews to the game of law can do no wrong. Whatever is not prohibited is permitted, we reason: if indefinite detention and mass surveillance aren’t clearly illegal, they must be legal. If U.S. targeted killings are not manifestly unlawful, they must be lawful, and if they’re lawful, they needn’t keep us up at night, dreaming of dead and broken bodies.

“When you leave the game of law for the game of life, you’re thrown back into the messy world of policy and morality. Suddenly you have to argue about right and wrong, good and evil, fear and hope, cruelty and compassion. Few lawyers are good at that sort of conversation, but it’s a conversation we need to have.” How Everything Became War and the Military Became Everything: Tales From the Pentagon by Rosa Brooks; Simon and Schuster, 2016 – p. 363

Both Rosa Brooks and Roy Scranton are reaching for a human venture level of thinking, caring, learning and action. Our small community is working out approaches to development that many other thoughtful people are reaching for. We need to make our work more widely accessible, and link with folks who are pushing on this frontier in different parts of the world. We’re working on it, with our website, newsletters, intensive programs, podcasts, online workshops and more, but it is slow. We depend on volunteers who are busy with family, paying jobs, and a variety of life & community engagements.

At a recent board meeting it was suggested that we ask our alumni for financial support, and that I write a letter requesting this support. I hesitated at first. I’ve never been comfortable asking for help, especially financial help. False pride perhaps. Then I thought of the agencies Janice, my wife, and I support: Médecins Sans Frontières, Amnesty International, PBS, Common Dreams, Cancer Calgary. We support these groups because we value the humanitarian work they do. It isn’t “charity” so much as a form of solidarity of purpose in a world where intelligence, caring and compassion are so badly needed. We feel honored to be supporters.

As alumni of our programs, I don’t feel that I need to convince you of the scope and seriousness of the challenges humanity is facing, or the significance of human venture levels of understanding and caring in the search for solutions. This brings me to the point of this letter, which is to ask for a financial contribution to help keep the work going. Anything you can give would be much appreciated. You can donate by clicking on the button below. We are a registered charity, and a tax receipt will be sent to you.

Thank you for your consideration,

Ken Low
On behalf of the Human Venture Board