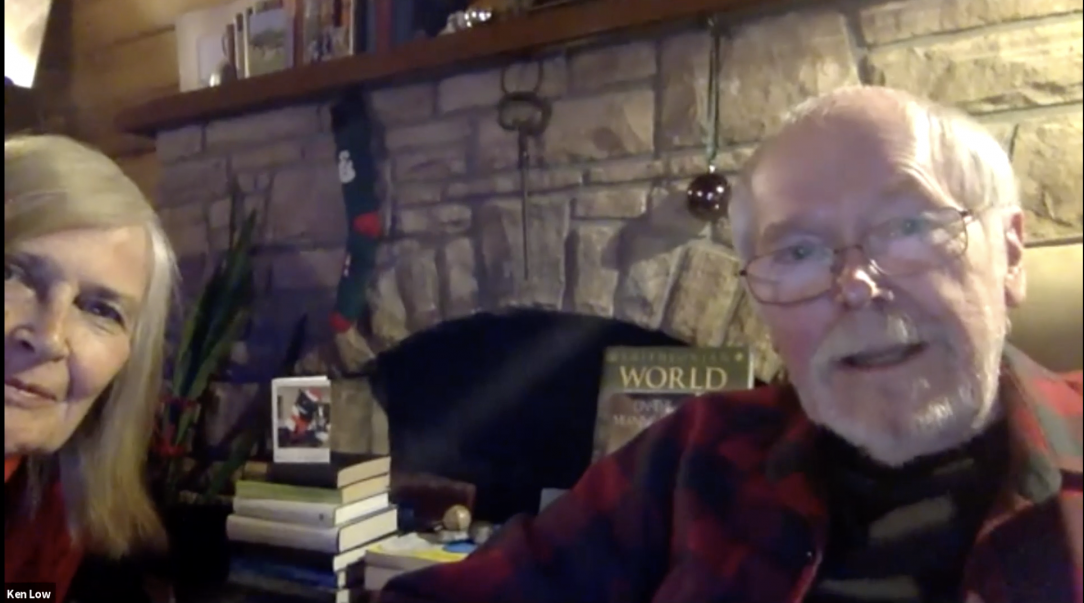 It’s amazing to think that Ken has been with the Human Venture community for 20 years now. With that in mind, he wanted to share something that happened around this last Remembrance Day 2020 that overlaps with the solstice season.

As usual, Ken had a book that he was going to recommend during one of the bi-weekly Human Venture Associate meetings. It was the night prior to Remembrance Day, November 11th. During that call, he was going to talk about the dynamics and importance of memory. In order for things to be remembered, it has to be “membered” in the first place. Without that, there is no remembering.

We go through our lives “membering” in order to effectively remember! And we remember so that we can make better sense of the world as we make our way through it.

The difficulty though was that Ken completely forgot to bring all this up during the meeting (as he said with a chuckle). This is likely something to be expected, and happens more often after 75 years of age. It seems exacerbated further in this time of living through COVID-19. Ken said he’s learned to laugh at himself more often, which is a vital survival skill these days.

Anyhow, he realized he forgot to bring up those prepared set of thoughts only after the call was over. And when he got up the following morning, November 11th, and turned on the radio, there were all kinds of Remembrance Day broadcasts to remind him. There were interviews with families of veterans, and accounts of the state of the Canadian armed forces today along with what they do. There was also a look ahead to the events of the day yet to unfold that would be held in the reduced social context we have in these pandemic times. Even in the absence of the parades and social gatherings, people were still carrying on remembering. They were remembering as best they could given the circumstances.

As Ken was making his way through the day, he listened to the ceremonies from Ottawa. He did so with his own stocked memory of growing up there. He attended many ceremonies at the National War Memorial (Epitaph) in the centre of Ottawa. He also attended performances by mass military bands, and other celebrations and special events. Of course there was the fly by of various aircraft of the services too, something that is always hard to forget.

Remembrance Day was always highly evocative. The focus is on the wars and the sacrifice, and the importance of actually remembering the sacrifice. But there is little emphasis on thinking through what might have possibly been done to prevent the necessity of the sacrifice in the first place.

Accepting the fact that from time to time it is necessary for people to fight and die, or fight and kill (which may be worse for us as a people), war is never-the-less something to be avoided. Should we not spend some time thinking about what it would take to prevent that kind of event from happening? Those thoughts scratch and niggle from time to time, so to speak.

These lines of thinking can come up when carried away with the excitement of the memories at a surface level. They also come sometimes during a sense of communion, or joining in with others who you know are feeling much the same way about things, like the amazing fact that people are prepared to sacrifice themselves.

A realization came from the reflection about forgetting and then waking up in the morning to the broadcasts. We are immersed in a culture where there are institutions and individuals who are not in a forgetful mode! We rely on the ceremonies, and the traditions, and the experience that is encoded in the custodians of our culture. They help us navigate our lives and to remind us when we forget.

The Christmas and Solstice event can be seen in a new light when thinking about memory in this same way. Here we have a set of traditions, societal and cultural assets, and developments built around them. Basically, the elements of experience that communities provide us with at these times are reminders of something potentially important. The problem is though that it is social, and like Social Media, all kinds of things get added or dumped into the pool of collections. A lot of stuff that gets put in there may not be all that wonderful. In fact it can be downright awful. So it is with the solstice event too.

The Solstice might not be particularly inspirational and can be crass and superficial. It is easy to escape that if you look at it just a bit deeper. If you look for it, you can see really clear examples of the pursuit of higher levels of meaning and caring with real examples of people trying attend to the better angels of their nature (or perhaps examples of feeding the good wolf inside them, and resisting the pull of the threats and growling of the bad wolf inside them). Those things are always available to us to do if we choose.

“An old man says to his grandson: ‘There’s a fight going on inside me. It’s a terrible fight between two wolves. One is evil, angry, greedy, jealous, arrogant, and cowardly. The other is good-peaceful, loving, modest, generous, honest, and trustworthy. These two wolves are also fighting within you, and inside every other person too.’ After a moment, the boy asks, ‘Which wolf will win?’ The old man smiles. ‘The one you feed.'”

I will close with a quote from Ken’s solstice message.

“Usually there is something in the mix of solstice messages to remind us that we may be forgetting something important, something that we all need to try and do, or to investigate further.

It’s significant, and at least interesting, that we can recognize the regularity of the shifting daylight during the solstice season. The remarkable regularity seemed to act like a trigger for our curiosity, and a prompt to observe more closely how things are actually working.

Being curious primates, that kind of cognitive process and thinking comes naturally to us in many ways.

Through careful record keeping (in some form), and with observation over generations, we build a store of knowledge. We continually tested its accuracy to see if our accounting was good.

A huge web of associations comes from those observations and record keeping, there are dependable cycles!

As the daylight changed with regularity, so did the star patterns, frequency of weather types, amount of plant life, animal behaviour, and migrations. Our “accounting” processes with those observations made it possible to anticipate things, such as when to plant and harvest or travel.

With continued observation and remembering, the depth of understanding increased. By applying the growing understanding in each cycle over time, from one generation to the next, it helped to develop a better and very useful relationship with the sun rise, the night sky, the world around us, and the cosmos.

Don’t forget that as a part of our story we are writing about our lives, and our times, we are reaching for the better angels of our nature. And the better angles are all in favour of being joyful and as happy as we can!

I wish you all a good and productive time, stay healthy!”