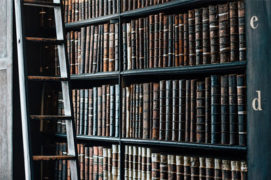 The following list of books includes those that were either drawn on in 2019 to support our on-going explorations and programming or were acquired in recognition that they filled a gap and could be useful in the future. There is some overlap with 2018 selections and a few that were acquired to be read in 2020.

I have read many of these books, not all of them, or not all the way through, but I have read enough in each of them [about them in the case of very recent acquisitions] to be convinced of their potential contribution to understanding human venture – counter venture paths of development and decay.

I’ve clustered the books under different headings to make the list easier to navigate, and to highlight something of the range of subjects included in Human Learning Ecology. Most of the clusters are self-explanatory, but three might benefit from a bit of explanation.

One is the cluster that includes Trump. Understandably many thoughtful people are tired of hearing about Trump’s latest free-wheeling assault on truth, reason and civility, but from the perspective of Human Learning Ecology, Trump and those who devotedly follow him, his enablers and the legions of bystanders, constitute a case study of large-scale structural ignorance that has already done a lot of damage, and has the potential for doing much, much more. The forces behind the Trump phenomenon are not unique to the United States, they are active in every society, accelerated by globalization and new forms of media. Turning away only enables these forces. Containing them begins by understanding them. Here’s a very brief sample that focuses on Trump’s world view:

– Cliff Sims, former special assistant to President Trump. From Trump and His Generals by Peter Bergen

Another cluster that might be helped by a bit of explanation is the one that includes adaptive military leadership. Understandably, war is a subject that many people prefer not to have to think about, or if they do think about it they think only of the waste, suffering and injustice that war inevitably brings with it. It might surprise people to learn that most thoughtful military leaders are very much aware of the waste and suffering associated with their chosen profession, and the actively seek ways to prevent or constrain it. And because war is essentially a high stakes adaptive positioning / learning contest, military history has been one of the important sources of pattern searching in building the meta-framework.

But there is another reason for including this cluster of books. The U.S. military is the only large American institution Trump has not been able to co-opt or corrupt. There are many reasons for this, but it is in large measure a result of the quality of a core of senior military leaders who constituted what the media called “the adults in the room”. There is much to be learned about resisting delusion from these leaders.

Finally, the cluster under “error dynamics” includes a few of the books we are referencing in our online program for Human Venture Associates, but would be of general interest to our Human Venture community.

† Indicates a book, while lengthy, is highly recommended.