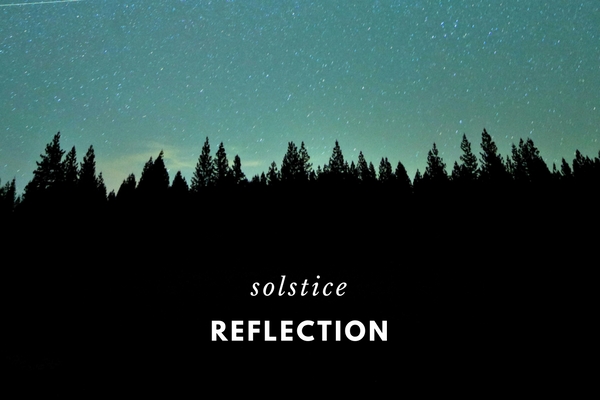 The solstice season is here again: one of two seasonal turning points in our 940 million kilometer journey around the sun. Solstice holiday celebrations, like most cultural traditions, contain a mix of meanings from superficial to profound. Ideological, commercial and entertainment interests harness the season for their own limited purposes, but the opportunity to search out deeper meanings is almost always present.

From a human learning ecology perspective, the solstice season is a gift package of histories and case examples that can teach us much about human nature, and ourselves, if we take the time to explore and reflect. So this year, I’m suggesting you give yourself, your friends and your family a gift of intellectual and existential hunting. I’ll provide a few trailheads to explore. Where you go and how far you go is up to you. As you will see, there are many starting points, and the journey of discovery is never-ending.

The word solstice is derived from two Latin words; sol (meaning “the sun”) and sistere (meaning “to make stand”). The term solstice indicates the moment when the sun’s daily arc across the sky reaches its highest or lowest point and begins to reverse direction. Of course the sun doesn’t move relative to the earth. It appears to move. Some questions to explore: how and when did our ancestors figure this out? What’s the practical difference between appearance and reality in this case? What’s the significance of assumptions about what is fixed and what is moving? How might such assumptions limit our understanding of other dynamic processes that enable and sustain all forms of life?

While we think of the December solstice as being the winter solstice, it is the summer solstice in the southern hemisphere. The meaning of solstice can’t be tied to a single season or location; a bigger picture than our own experience is required. What is this bigger picture and what path did our ancestors have to travel to discover it?

Here are a couple places to start:

While our distant ancestors didn’t understand the details of our planet’s movements or our relation to the sun, they knew about the solstice turning points. They lived embedded in nature and closely observed everything, looking for patterns and regularities that might help them survive. Their sky world was populated and illuminated by mysterious traveling entities made explainable and familiar through stories and symbols. Observed over time, there were striking regularities in the movements of these remote heavenly bodies that correlated with a wide range of more immediate concerns; changing seasons, reproductive cycles of plants and animals, recurring floods, animal and bird migrations – and more.

Humans often have difficulty understanding the difference between correlation and causation so there was a tendency to assume the heavenly bodies were directly causing the locally observed events, resulting in an impulse to worship some mythical form of them. What is the difference between correlation and causation? Why is it easy to confuse them? What are the implications for our understanding of how things work?

The regularity of movement of celestial bodies and the fact that some of our ancestors could discover the patterns with a high degree of reliability had a big impact on our species. Ancient people in many lands built monumental structures that were precisely aligned to astronomical events.

Here’s a website that lists archaeoastronomical sites from around the world. Why are such sites so widely distributed? What does this tell us about humanity’s process of becoming?

The winter solstice season and the arrival of a new year is a time to take a break from routines and reconnect with family, friends, nature and self. As the hours of darkness reach their limit and the sun begins its long slow climb higher in the sky, it is also a time to reflect on the gift of being alive and human, and the responsibilities that come with that gift. We are part of a trans-generational process of discovery.

Another trailhead to explore is how Christmas came to be. Here’s a few books on Christmas traditions:

“Pagan Christmas: The Plants, Spirits, and Rituals at the Origins of Yuletide” by Christian Ratsch & Claudia Müller-Ebeling; Inner Traditions, 2006

“The Battle for Christmas: A Social and Cultural History of Our Most Cherished Holiday” by Stephen Nissenbaum; Vintage, 1997

“Christmas Customs and Traditions” by Clement A. Miles; Dover Publications, 2011

Also, here’s what we’re reading in the alumni program – these books are highly recommended.

“The Hidden Life of Trees: What They Feel, How They Communicate – Discoveries From A Secret World” by Peter Wohlleben; Greystone Books, 2016

There are many resources that provide fuel for a life-long learning process. Best wishes to all of you for the solstice and 2017. Keep going!